A while ago I wrote a response to an anti-Trotskyist leaflet1. It claimed that, by rejecting the possibility of ‘socialism in one country’, we try to put down “those who have the temerity to go on and build socialism”. It was a Stalinist group that put out this leaflet, but an orthodox Trotskyist could easily have written it.  One of the groups I spoke to at the Marxism festival was the International Bolshevik Tendency2, who are supporters of the theory that the Soviet Union (along with many other countries) was a “deformed” or “degenerated workers’ state”. Their spokesperson wagged a finger at me and told me about how awful it is that the SWP looks at the Hungarian uprising of ‘56 positively, rather than as an act of counterrevolution, and how we think a socialist revolution still needs to take place in North Korea.

So although as part of this talk I won’t be going over the arguments of the most uncritical Stalinists, I will be going part of the way to addressing that position, since the so-called Orthodox Trotskyists are themselves so often counterrevolutionary and apologists for Stalinism. It sounds like nonsense to say that a Trotskyist could be guilty of this, but Cliff explained well how it happens, and how it comes from following Trotsky dogmatically but losing his essence, and abandoning classical Marxism3.

END_OF_DOCUMENT_TOKEN_TO_BE_REPLACED 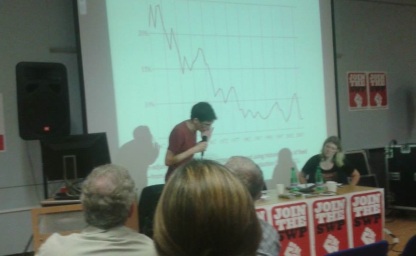 Joseph Choonara, author of Unravelling Capitalism, started off my first Marxism festival, with his talk “The rate of profit and capitalism today”. He follows the Financial Times and other financial press very closely, and finds that mainstream debates are usually between austerians and Keynesians. Those in favour of austerity believe that cutting public sector spending is necessary, while Keynesians believe that austerity has gone too far and that public sector spending is needed. This is sometimes called “making capitalism work for socialism”. Joseph argues that, while Keynesian policies are preferable for the working class, neither positions deal with a fundamental global problem: low level of investment. Using statistics on US and European economies, he shows how the long-term tendency is for the return of investment to fall, and how stimulus (like that of 2008) or any other state involvement fails to restore profitability.

These problems are then related to the increase of ‘dead labour’ in ratio to ‘living labour’. That is, technology replacing the need for so many workers. A familiar example is one checkout assistant supervising six self-service checkouts, rather than six workers, each with their own checkout. This is an inevitability, not something that bosses really have a choice in. Given these problems, along with overproduction, isn’t it a surprise that the capitalist mode of production didn’t meet its maker 150 years ago? Choonara explains that crises themselves find ways of restoring capitalism.

Though the terminology was hard to follow at times, the talk contained well-known examples to illustrate points, from the selling off of Woolworths for £10 to the high profitability after the destruction of World War Two. For a beginner in economics, this talk made it clear how concepts that often seem abstract and inconsequential in fact affect our lives and create struggle. An open discussion followed, in which many members of the packed lecture room asked questions on fictional capital, the Labour Party, and one speaker pointed out that 25 families in Greece own 75% of the country’s wealth. On the question of how optimistic socialists should be, Choonara ended the talk by borrowing a phrase from Antonio Gramsci: “Optimism of activity, pessimism of intellect”.

Michael Roberts’ blog was suggested for someone an economist who stands outside of mainstream debate.

END_OF_DOCUMENT_TOKEN_TO_BE_REPLACED

Leftists everywhere must have enjoyed the moment yesterday when they realised it was the 195th birthday of Karl Marx. It’s a meaningless anniversary of course, but this kind of thing serves as a reminder for how relevant and applicable some aged political theory can be. I was rudely interrupted from this line of thought when I stumbled across a piece by a five-year-old journalist who has never read anything by Karl Marx and who dismisses supporters of the labour theory of value as ‘tedious’.

Streithorst points out that Marx’s philosophy is indebted to Hegel, Ricardo, Adam Smith, and others. This is no secret and Marxists, as far as I’ve seen, have no illusions about this. The mistake is in saying that the labour theory of value was already outdated by the time Capital was being written. If this was about the Ricardist model then there might have been a fraction of a point. But Marx brought his own substantial changes to the theory, most notably the concept of abstract social labour. The theory of value and surplus value explains how uncompensated labour allows a section of society to become a ruling class and alleviate itself from the burden of its own necessary labour. This was true in different ways in feudal society, plantation slavery, 19th century capitalism, and remains an injustice  and the backbone of capitalism today.

END_OF_DOCUMENT_TOKEN_TO_BE_REPLACED

Based on a talk I have given and hope to give again. A friend has let me borrow Jonathan Neale’s book on ecosocialism, so I will have more insights soon hopefully.

Believe it or not, I think that climate change has not been politicised enough. It is central to questions of austerity and nationalisation, and is likely to affect the world’s poorest people the most. There are certainly some useful parallels therefore to be found between class struggle and environmentalism. We cannot expect “green capitalism” to work. If a radical new socialist way of organising society is needed, it should include investment in jobs, technology, and scientific research that will reduce the effects of global warming.

A few weeks ago, I noticed what I see as a contradiction between two publications of the Green Party of England and Wales. The first text is the third page of a welcome pamphlet, on which the party’s ten core values are listed. They are simple, thoughtful, and difficult to disagree with. The second core value in particular sounds very Marxian:

“The Earth’s physical resources are finite. We threaten our future if we try to live beyond those means, so we must build a sustainable society that guarantees our long-term future.”

This principle weirdly echoes chapter 32 of Marx’s Capital Volume 1, which argues that capitalism cannot go on indefinitely, and that crises and an eventual collapse is inevitable, because of overproduction and other contradictions inherent in the capitalist mode of production.

END_OF_DOCUMENT_TOKEN_TO_BE_REPLACED

Music students, I think, have something unique to offer if they wish to oppose capitalism and classist prejudice. The different fields of performance, composition, and music history or musicology are all useful platforms, if you find singing union songs to yourself isn’t enough.

Learning music history, particularly of Western art music, often feels like studying the history of the stuffy aristocracy, who have so little in common with the rest of us. If you are in a position to teach an overview of music history, it is perfectly possible to have a theme of class division and struggle in your lectures. Teach about what the ignored majority was doing with music and how it functioned socially. Place emphasis on the exceptions to what was expected of a musician. This could be the women composers all the way back to Kassia need to be mentioned, how the guitar broke some class boundaries in Spain, or how the first ‘superstar’ performer, Paganini, had a working class background. In terms of original research, ethnomusicology is very exciting for talking seriously about folk music, and music in class struggle and protest is the topic of many articles and books, such as Dorian Lynskey’s ’33 Revolutions per Minute.’

If you love performing in a classical style, and want to orientate your studies in that direction, then perform to as many different people as you can, in any setting. If you are asked to play a piece of music, or if someone wants to hear what you’re listening to you, and you dismiss this by saying “oh, you won’t like it,” it might just be embarrassment for your personal taste, but often I think it is a childish kind of elitism. Many more people will get into classical music if they are given they chance and if it isn’t presented in a way that makes it seem totally separate from all other music. I perform weekly in my university’s Performance Society, usually doing something by Fernando Sor, and accompanying a singer later on. Most people do a pop song or part of a musical so I feel like, by including classical music in this setting, I’m reducing any class implications of the music, in a small way. If you do any instrumental teaching like teaching folk guitar or jazz piano, you could suggest some easy classical stuff to show that it isn’t so boring. One of my earliest influences in guitar-playing was my granddad’s skiffle band and some ‘Guitar Legends’ compilation album, but my first teacher broadened my listening and playing by suggesting some simple flamenco-influenced pieces.

Composers, when writing stage music or anything character-driven, could present a typically unheroic character in a dignified way. Think Bizet’s ‘Carmen’ but without killing them off. Another option is to compose in a classical form but use an obvious folk influence, like Smetana, Glinka, Bartók and others have done before. Usually this is used for some kind of patriotism or nationalism, but it has the effect of legitimising the creations of poorer people as real art.

Like students of every discipline, music students need to protest tuition fees and put more pressure on the NUS or their own institution’s union to fight it. Many musicians are not having their talents fully realised when they miss out on a music degree. It goes without saying that we need to protest capitalism and austerity at every level, too. Poverty stifles creativity.