What I will talk about mainly is the recent events and what they mean for the struggle against racism. The attack in Paris was, particularly for Dutch anti-racist activists, a quite bizarre experience. I was very active in the Dutch anti-racist movement when [?1:05] came up firstly after 9/11 in 2001 and then Theo Van Gogh was killed two years later. Watching Paris was like being thrown back 10 years, with some similarities and differences that I want to going into because I think they are important for our analysis in how we deal with the current form of Islamophobia and how we understand also how it changed. 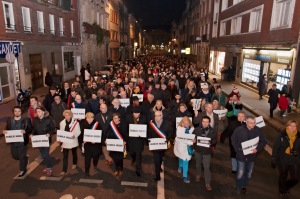 What is interesting is, everything you hear about Paris, similarly what we heard about Van Gogh in the Netherlands, is that it’s very unique and that it’s “unprecedented” and “historical.” All the news framings are giving us the idea that this is a historic phenomena. The only reason why it’s unique is the sense that terrible things happen in the world but they happen in the periphery, or they are proxy wars elsewhere, in which Europe or the West is involved, but they don’t happen in the centre. This is the “unique” element used in framing this as a “shocking” event. For those of us who know people in other parts of the world, who are in solidarity with other struggles, it doesn’t quite feel that way. Of course it’s unique for other reasons but we sort of have an ability to internationalise and frame these events in a different light. But an identical narrative was given when [?3:06] was killed: it was the first political assassination in 300 years in the Netherlands.

END_OF_DOCUMENT_TOKEN_TO_BE_REPLACED

In response to growing rates of unmarried cohabitation, a bill is being prepared for the Riigikogu (Estonian parliament), which, if passed, would allow couples to formalise their relationship through civil partnership, regardless of gender. The bill seems very likely to succeed, having already gained the support of MPs from all four major parties, including a minority from the most conservative of these, the Pro Patria and Res Publica Union. There is no talk of it leading to anything like the UK’s Equal Marriage Bill. (Even if we were to assume that a marriage equality bill could provide full equality, what we have in the UK is not truly ‘equal’ as it does not accommodate transgender couples.) According to Gay Star News: “it seems unlikely that the bill will create adoption rights for same-sex couples in Estonia as this is strongly opposed by government coalition member party the Union of Pro Patria and Res Publica, whose leadership are opposed to same-sex partnerships being recognised.”

The truth is, for many of us, that same-sex marriages and civil partnerships are our very smallest concerns. It is such a small step, which offers some extended property rights and perhaps more tolerance, but little else. Anyone who doesn’t buy into the fantasy of “gay affluence” knows this. Far more urgent problems specifically affecting LGBT people include unemployment, homelessness, censorship, and violence at the hands of fascist gangs in collusion with the state. Being so close to Russia and Lithuania, Estonians must feel a particular urgency against the violence and censorship of “gay propaganda”.

From June 2nd to 8th, the annual Baltic Pride festival will be held in Estonia’s capital, Tallinn.

It is likely that this will be a betterindicator of public opinion on sexuality than the civil partnership law. Homophobic protesters fromthe conservative Pro Patria and Res Publica Union should be expected, as well as from the small but visible far-right Estonian Independence Party, which uses white supremacist symbolism and has ties to neo-Nazis who annually display support for the Estonian Waffen SS.

We cannot rely on a change in the law to destroy institutional sexism and people’s commonly held prejudices, when lawmakers have historically sought so much to divide and conquer the working class along lines of sexuality and gender. Our goal as socialists is queer liberation, and those kinds of discussions will appear in Baltic Pride, not in parliament. We must find some way to show solidarity with this campaign.